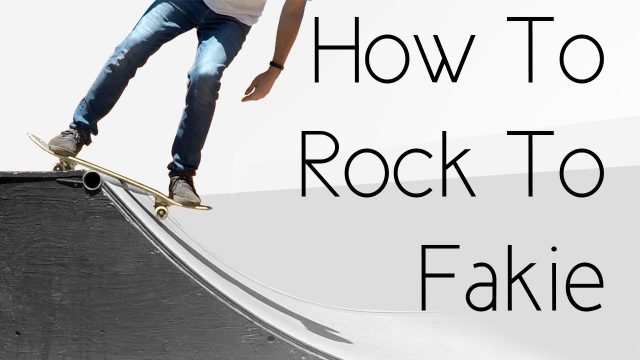 How to rock to fakie on a skateboard

Drop in on one side of the curving obstruction and plant the bottom of deck on the other side of it.

When the nose/tail has stalled on the coping, it’s time to roll fakie back to the starting place and do it all over again.

The first step is to get used to riding a ramp, bowl, or ledge comfortably.

The pumping technique and ability to roll across curved surfaces must be mastered.

When you’re ready to drop in, a technique for intermediate to advanced skaters, do so.

Dropping into a steeper slope is more dangerous because it’s more difficult to avoid a wipeout.

A soft, low-angle ramp or bowl could be a good place to begin.

The ability to ride fakie is also required before attempting the rock to fakie.

You don’t want the board to get stuck and hang up on the coping if you’re only holding it on the metal pipe for a few seconds.

Because if you don’t, your weight will cause you to tumble backwards.

The secret is to keep your weight evenly distributed on your back and front feet so that the skate remains firmly planted on the coping in the center of the deck’s bottom.

The proper distribution of one’s weight and a lot of practice are both necessary for success.

Per Welinder, author of “Mastering Skateboarding,” says, “The fear of this trick is usually justified because it is easy to screw up and fall in a way that is tough to jump away from.” 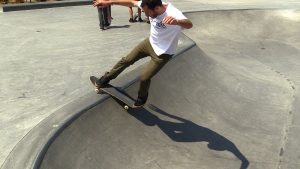 You have one last chance to rock out to fakie flawlessly.

Using these steps, you can achieve it:

1.Determinedly jump into a ramp or bowl with all of your might.

2.Take a front position and roll toward the coping at a speed that will allow your front wheels to lap over the coping and onto the deck;

4.Make sure the back trucks don’t bang into the coping by rocking the middle of the skateboard’s deck on the metal pipe.

5.Stall the board for a few seconds and maintain a steady momentum;

6.Allow yourself to regain some of your weight while you make the adjustment;

7.In order to clear or roll over coping when your body begins to return to its starting position, slightly take the weight off the nose end of your board.

8.Roll fakie back to where you started;

10.Drop in and roll away with your upper body leaning on the front foot and away from the board’s back 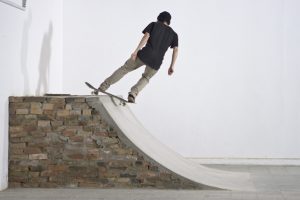 The rock to fakie is typically made more difficult by rolling backwards in the approach to coping.

“Some coping will have a lot of bonks and will be less forgiving than smaller coping,” says Welinder in addition.

“The best fakie ramps don’t have a lot of coping,” says the author.

Try to expand your stance such that your feet are firmly on the board’s nose and tail while you’re going back in.

To learn how to lift your front wheels over the coping when entering the rock to fakie and then lift them again a split second later when returning to the transition backward, you’ll need to practice this technique.

To get your body adapted to the lifting motion, practice this on the tail and the opposing wall..

It’s likely that your first successful rock to fakie tries will involve the board slapping over the coping a little bit.

“The front wheels may even be touching the coping at the peak.

The board will rise higher on the deck as you gain greater confidence.”

With the nose of the board all the way up on the deck, the most determined rock to fakie will slam the back trucks into the coping. 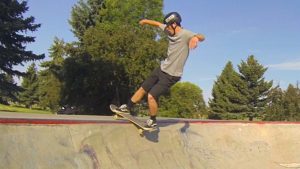 How do speakers work

The principles of speaker driver technology haven’t changed in close to a century despite substantial breakthroughs in speaker design and manufacturing.

Almost every loudspeaker on the market today, from your phone to your home theater system, uses Edward Kellogg and Chester Rice’s 1925 dynamic driver.

However, how do speakers actually operate?

Let us begin with the fundamentals. 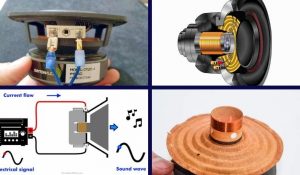 How speakers work: the basics

A loudspeaker’s driver is the basic electroacoustic component that enables it to perform its function.

When used as a transducer, its job is to convert one kind of energy into another.

To put it another way, this transducer converts the amplified electrical waves from your playback device, be it your phone or the cartridge of your turntable, into sound pressure waves in the air for your ears to hear.

The speaker’s driver is an electromagnetic motor, which is both simple and effective.

The rear of a speaker has two terminals where an amplifier sends a signal.

They connect to a cylindrical coil of wire suspended in the space between two permanent magnet polarities, where the current flows.

Faraday’s law dictates that this coil swings back and forth within the magnetic field as the current going through it alternates in direction with the signal provided.

One end of the speaker cone is connected to the moving coil, which moves the cone back and forth.

An airtight surround or suspension holds this cone in place around its perimeter.

When the cone moves, it exerts pressure on the air around it, causing sound waves to be generated. 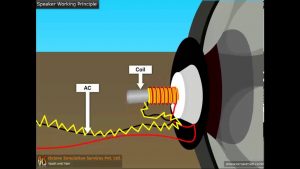 It’s a fact that the speaker driver is positioned in a box, but why?

What’s the point of having a box if the driver can produce sound on its own?

Why are speakers mounted in boxes?

When the cone of a speaker driver moves, a pressure wave is generated from the front and the back.

There is a positive and negative pressure created by it as it travels towards you while pulling back the air.

Pressure generated by the driver’s two sides will effectively cancel each other out when the wavelength of the replicated signal is large compared to the driver’s size.

As a result, low frequencies (bass) are rendered inaudible at any practical distance.

Remove a driver from its enclosure if you wish to give this a go at home.

After the speaker is disassembled, you’ll hear a “tinny” sound.

Because of this, you can create the similar effect by mounting the driver in an extremely big and hard sheet of material (a baffle).

Because a wide baffle is required to prevent low-frequency cancellation, this isn’t an option in the majority of cases.

Closed boxes make it easier to accomplish this.

The air in the box acts like a spring against which the cone pushes and pulls, and that system has a resonance frequency below which its output diminishes significantly..

Loudspeakers must be airtight to prevent cancellation, which can occur if there are any leaks in the box. 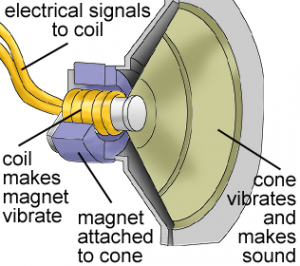 Why do some speakers have holes in them?

In the front or rear of many speaker boxes, you may observe circular apertures or slots.

What you’re looking at is a bass reflex enclosure, which has ports or vents.

When you blow air over an open beer bottle and a note is heard, a bass reflex enclosure operates in the same way.

Because the volume of air inside the bottle fluctuates with the amount of liquid in the bottle, the note changes.

If you want to fine-tune the sound of your bottle, you can change its port dimensions (the bottle’s neck) or its enclosure volume.

For systems that are properly tuned, this results in an additional boost in low-frequency performance immediately below the loudspeaker response rolloff point.

As previously said, this requires custom port tuning for every single driver and enclosure combination.

Even if the cone diameter of the new driver is the same as the old one, the box and port tuning will no longer be acceptable and the sound will be distorted. 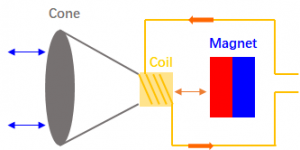 Now, you may have observed that most loudspeakers include more than one speaker driver—usually a smaller diameter one on top of a larger one—especially when they go larger than small portable boom boxes.

Multiple drivers of various sizes are used in speakers for a variety of reasons.

One driver may be capable of covering practically all the audible frequencies, but it has a number of drawbacks.

The bass will be difficult to hear if the driver is too small because it won’t be able to move enough air to do so.

Beaming is a term for this.

Frequency and wavelength are directly proportional to each other, and speaker drivers typically begin beaming at a frequency equal to their cone’s diameter.

As a result, the higher frequencies can only be heard if you’re directly in line with the speaker.

It’s not a nice speaker or a balanced sound.

There is a simple solution to this problem: a variety of drivers in varying sizes, each tuned to a specific frequency range (bass and treble, or bass, middle, treble).

Why it’s worth knowing how speakers work

There is no need to know how speakers work to appreciate their music.

It’s usually a good idea to learn about audio equipment before you invest a lot of money on it.

It’s easier to spot charlatans when you have a firm grasp of the fundamentals on which to build your understanding.

Additionally, understanding how speakers function might aid in the diagnosis of issues.

Also, if this article has piqued your interest, there are numerous web places where you may discover how to make your own using widely available components.